What Leo the Barber Means for Dotcom 2.0

How commission-free trading ushered in the next dotcom bubble 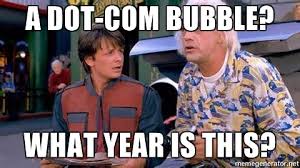 
Back in college, everyone would get their haircut at Leo's barbershop. Leo was an Italian-American renaissance man, of sorts. In addition to cutting hair, he was also a stock trader. His shop had CNBC on every TV, and a cut by Leo came with complimentary stock tips instead of a free lollipop. The whole campus would buzz about Leo's picks, and he had the investment club (or those with some scratch) trading along with him.

It was the late 1990's and electronic trading and discount brokers made the stock market accessible to a massive market of small investors. If discount trading enabled the mania, a new technology called "the internet" got them to jump in the game with both feet. It was the dotcom bubble and everything was going up. Fortunes were made during the good years of the late 1990's, and stocks were the subject of cocktail- or keg- party conversations throughout the world. Global Crossing, Worldcom, Lucent: look em up.

We are seeing a similar phenomena now: Robinhood undercut the retail brokerage industry, driving the direct costs of transacting shares to zero. At the same time, limits on trading size have been dropped so low that small investors can participate with as little as $1.

Those small traders have newfound swagger after the wallstreetbets crowd helped promote a monumental short-squeeze on GameStop (GME) that has captured the attention of the American public for the last week. The David versus Goliath narrative of small traders pushing around large financial institutions, forcing them to call in their government pals for a bailout will do more to make stock trading a national obsession again than all the crappy Charles Schwab ads since 2002.

It's Dotcom 2.0: get on the tendie train and strap in- it's gonna be a wild ride!