WSB weighs in on the state of AMC

This guy’s post was deleted by the mods but it started everything off:

Okay listen I might be retarded but I’m not dumb. AMC bankruptcy is all but priced in and for good reason- they’re leveraged to the tits, being fucked in the ass by streaming services, and even when they reopen a lot of big block buster movies might be delayed because they aren’t filming right now so the movie business might be even slower than usual. But listen- even though AMC is technically fucked at this point in time and their theaters haven’t been doing great business they are making way too much money for outside companies for the industry to let them die. AMC is the biggest movie theatre chain in the US by a good amount with 661 theaters in the US. Here’s why they can’t die- Avengers Endgame grossed over 2.7 BILLION dollars at the box offices, most of those sales taking place at AMC. Disney made a fuck ton of money from this. Like a fucking ton. In the entirety of Q4 last year Netflix’s profit was a little under 600 million. Meaning that one movie produced by Disney made them more money than Netflix did in there entire quarter, and these studios are making 10 of them a year. So here’s the real point- when you take your stepson to watch toy story 2 at AMC you’re spending $20 on tickets which means that movie studios are making significantly more money then when you and all 50 dudes your wife is fucking sit down on the couch and circle jerk to Toy Story 2 on Netflix for your broke ass $8 subscription. Tldr: AMC is far too profitable for all major movie studio companies and producers as well the the entire concept of Hollywood and Disney for it to go bankrupt. Either bail out or buy out those are the only two reasonable outcomes. Conclusion: AMC UP 200% IN THE NEXT YEAR OR BAN ME

(Narrator: he got banned)

johnnyappleseedgate Do you understand what happens when a company goes bankrupt?

Their assets get sold off (usually by a restructuring firm which is what keeps me in a job) and the proceeds go to pay creditors.

What happens to all those assets? In this case mostly lease agreements and built out commercial real estate?

Well other people take then over! This is the circle of business.

The problem with AMC is that theatres across the US have been going bankrupt for years with no one willing to step in and take over. Theatres are dying.

So, not only will all their theatres get sold and potentially rebranded, but some of them may never re-open.

Disney doesn't need AMC to stay open. They just need theatres to stay open. It doesn't make a difference if the theatre says AMC on it or not.

Now, what Disney could do is buy up the AMC brand and their leases and call those Disney theatres and show only Disney movies in those theatres. (Edit: apparently there is some case law preventing this)

The only thing AMC theaters generally have going for them is location. There is no brand loyalty in that segment. Generally you're going wherever has the most convenient movie time and cheapest ticket.

What does AMC debt covenants look like and how many weeks of cash do they have to pay debts, opex, and other liabilities?

TL;DR: op is a retard and is possibly trying to sell you some calls because he/she knows AMC is about to get rekt by creditors. (Ask op for a screenshot of his positions ;)

losewhatulose All good points. In my opinion, AMC has the closest thing to brand loyalty of all major movie theatre chains and also has to most customers of all chains. If AMC goes bankrupt there’s no doubt that there will be less movie goers simply because there are less theaters near them and their favorite one is closed. This will likely not effect an avid movie goer, but the casual once every two months movie going family is simply not going to go further out if their way to see a decent movie at a theatre they have to travel further to and are not accommodated to. If this represents 10% of American families and they cut those trips from once every two months to once every 4, then the movie studios are losing upwards of a billion dollars a year. I think that while you make valid points the sheer volume of outside money relying on AMC to make a profit on their business will lead to a surprise buyout coming from someone (possibly even Apple) or a government bailout.

johnnyappleseedgate What you describe isn't brand loyalty, it's "loyalty to the closest theater to me".

Particular-Wedding If I was some big money vulture or distressed fund why should I buy AMC now when I can pick up its pieces for pennies on the dollar at the post - Chapter 11 bankruptcy sale? Why would I burden myself with potential liabilities like long term leases, employee salaries, and other fixed costs?

The same argument can be said about airlines, dining chains, and cruises.

Not crapping on your idea - just seeing what there is beyond just share book value.

maybeguineapig So the play here would be to look at who they owe money and take leaps on them?

Particular-Wedding why would you buy leaps on a creditor who would probably only recover pennies on the dollar? you'd want to bet on a 3rd party with no prior interest in AMC but with deep pockets.

These are the usual vultures like Oaktree, Apollo, TPG, Blackstone, Carlyle, KKR, etc.

Disclosure - I own 80 shares of BX

Trouble in the Village Square (SQ)

Is there enough $ in the SBA PPP program and will it be able to save desperate small businesses? 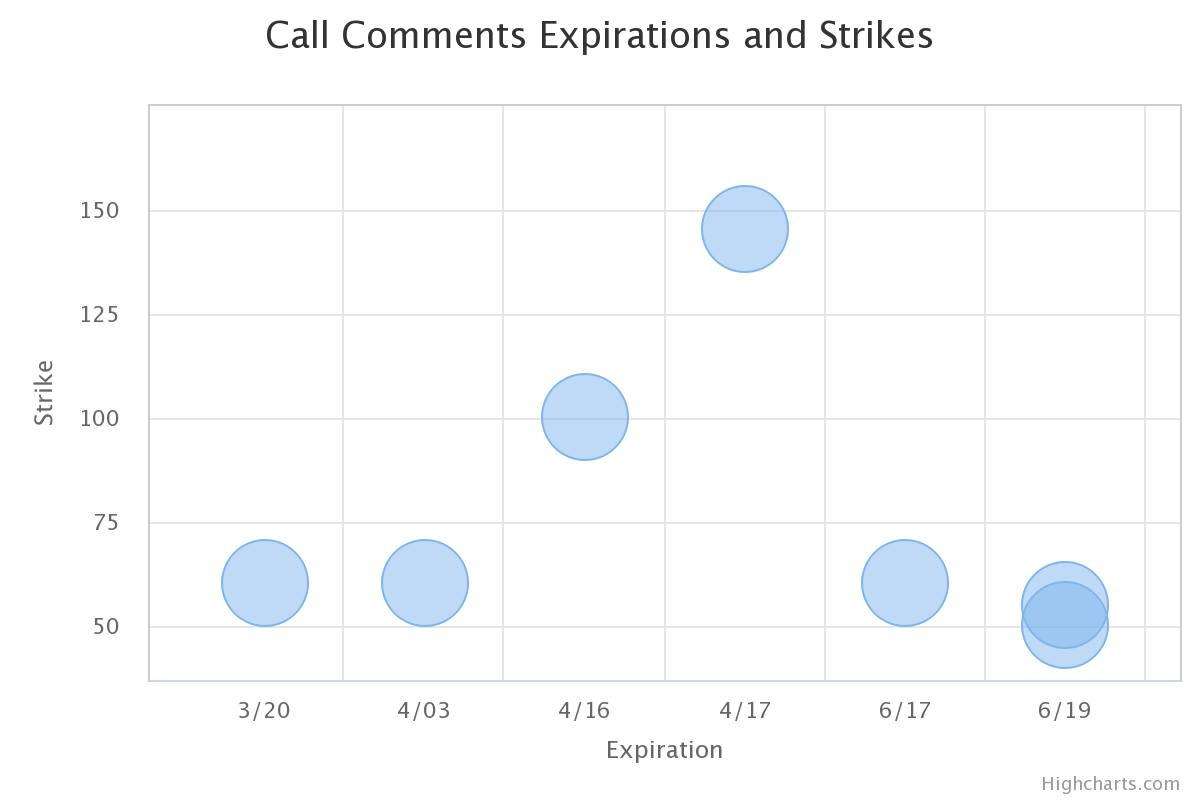 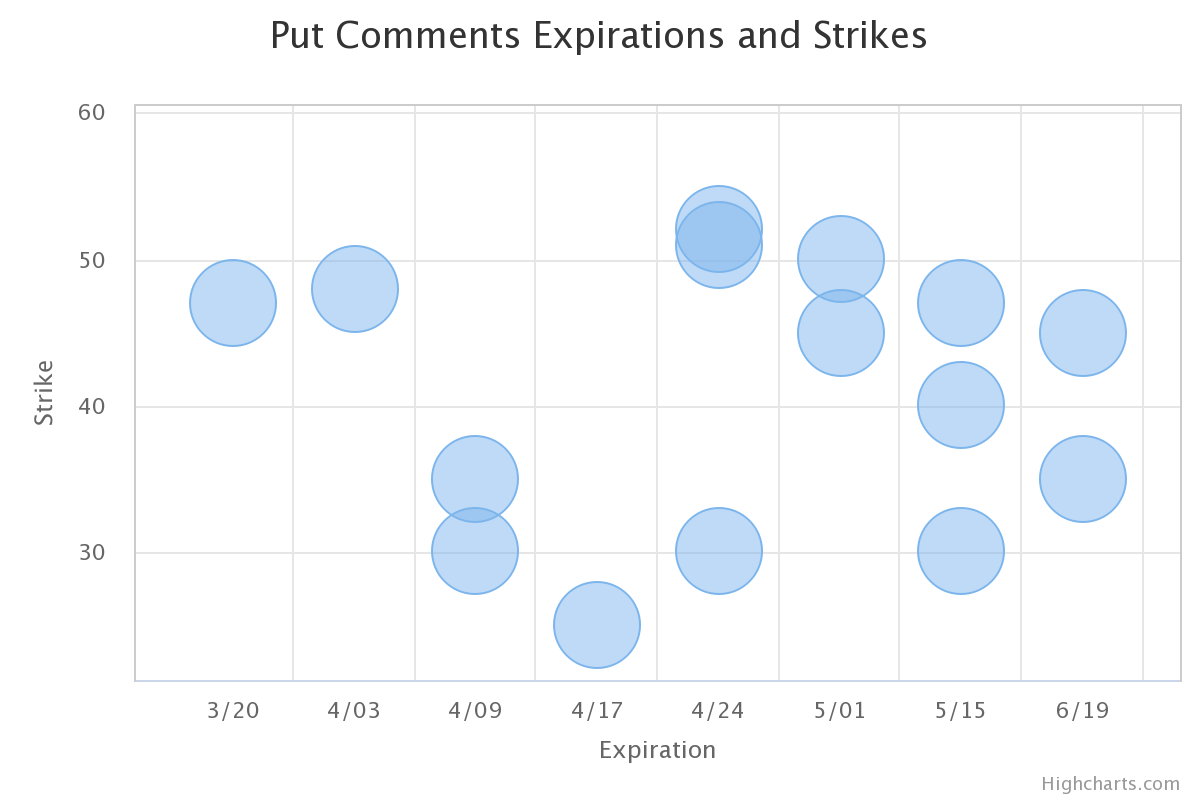 rabidmuffin If you want to play SMBs look at SQ. IWM is not made up.of small businesses.

US isn't affected as bad as Europe because of low pop. density and lack of public transit. Likely estimates come true, most of the country is good on hospital beds and ICUs. Military provides the needed extra healthcare resources in cities that need it: https://youtu.be/csfCKuy5HH8?t=48

Work starts to end in late May.

Beyond that, there may or may not be a second wave. Some data suggests virus doesn't spread well above 72F ambient temp.

jinxy0320 First few lines could be legit, but I doubt there wouldn't be a second wave in major city centers that drive the economy like NYC/SF/LA even if we extend lockdown months. Herd immunity is at least a year away and that doesn't even factor in likely virus mutations (there's already 2 identified strains of COVID-19).

Work starting in late May is doubtful at least in CA especially for non-tech companies. I'm in FAANG and we're already planning WFH through end of summer due to all the parents in our company who will have to take care of their kids personally through that time. Productivity has already cratered from personal experience and from managing internal teams. And this is for a company that can WFH and is revenue-neutral from this epidemic, anything that relies on in-person transactions like SQ and AirBnB I know for a FACT are planning for a year+ slowdown in topline revenue and overall growth curve. Now if you want to look at non-digital companies like anything travel/food/entertainment/logistics/import/export related then they are looking at MASSIVE topline revenue drops that will bleed into labor costs and defaulted payments down the line.

I have multiple friends in the restaurant business that I've invested in, high end and fast casual in SF. They can't even get SBA loans right now because their workforce is still > 50 people and the earliest they can even hope to ramp up is mid-summer. Then they're forecasting 30-50% demand drop for the rest of the year at the minimum, meaning they're working with a skeleton crew and all those unemployed people are going to remain unemployed.

churn_after_reading 12% of SPY is Apple.

AirBnB is fucked yes. But it's not publicly traded. SQ will suffer. But I'm not expecting MSFT and AMZN to sell less server time or AMZN to deliver fewer packages.

Also in Bay Area tech, formerly in FAANG. My current company is expecting to WFH through May at least. Beyond that, we'll see how work culture here evolves. As far as I can tell, within my immediate working group impact to programmer productivity is minimal. I know it's a bigger problem for non-technical work functions.

Then they're forecasting 30-50% demand drop for the rest of the year at the minimum, meaning they're working with a skeleton crew and all those unemployed people are going to remain unemployed.

I really don't think so, people here in SF are dying to be told it's okay to go to restaurants and bars. And anyhow, effects of low-wage service industry unemployment on FAANG earnings, is not as direct as WSB seems to want it to be.

walrusrampage I've been looking at spreads for 2021. Small businesses are the likeliest to get wiped from this, makes me nervous.

walrusrampage Don't get me wrong, I'm all about SQ long term. I own shares in my IRA. I'll check out the PPP.