Wallstreetbets didn't plan the GameStop trade, they evolved into it 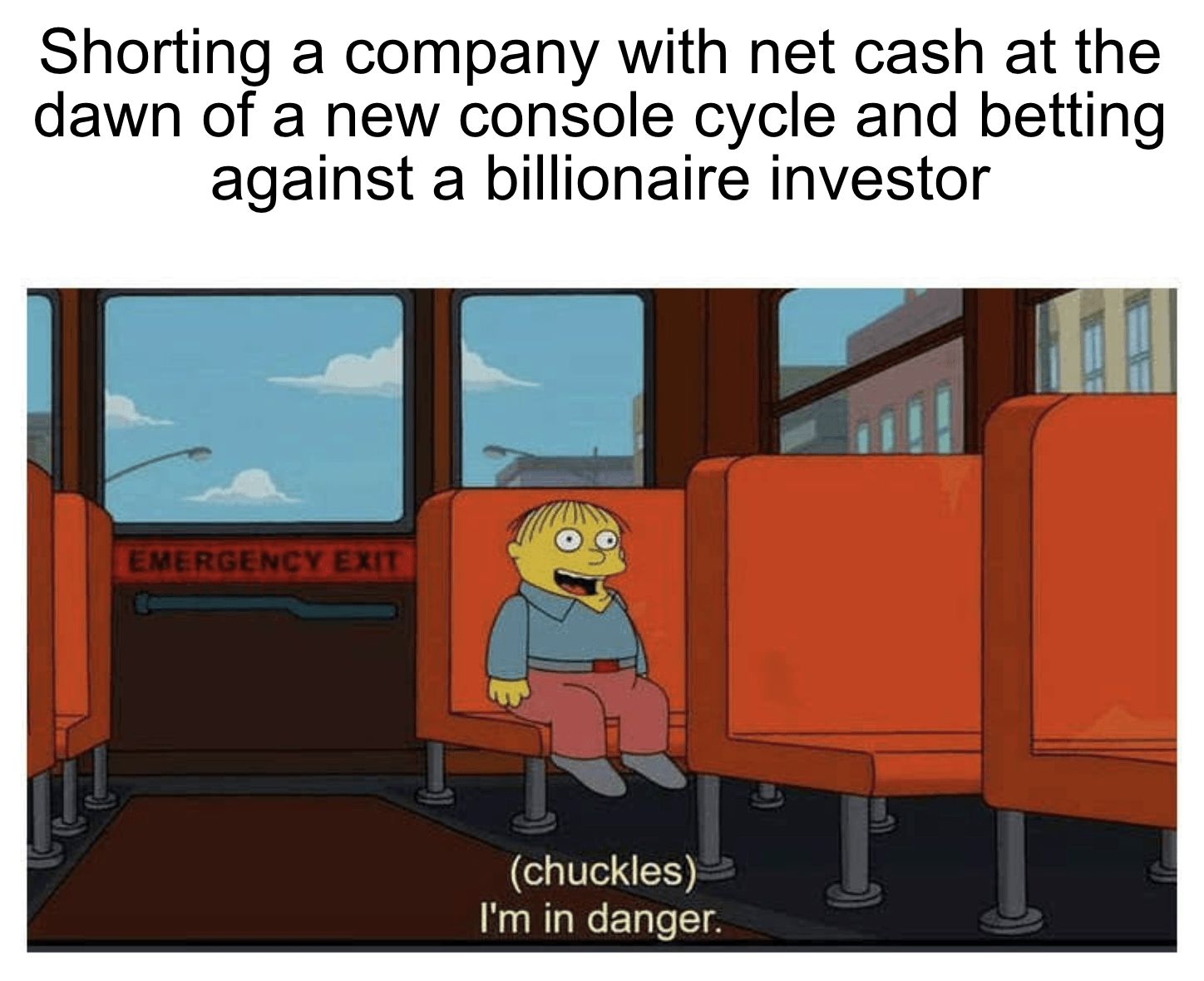 
Last week we wrote about how we saw the GME trade develop on TopStonks. That reject rocket ship was halfway to Mars before Robinhood pulled a Space Shuttle Challenger on the Wallstreetbets maniacs. On Thursday morning Robinhood limited new trades in Game Stop, AMC, Blackberry and several other of the more volatile retail stocks over the last few weeks. GME ended up down 44% on the day, the others similar.

While Robinhood claims that they were benevolently saving their retail traders from their own greed, others were throwing some serious shade at the r/wallstreetbets community. Former SEC attorney Daniel Hawke, who looks like Ethan Hawke if Ethan Hawke never got laid, had something very serious to say to the WSJ: “If they are all egging each other on using a social-media platform, they are effectively engaged in a crowdsourced pump-and-dump scheme.”

Those are legal fighting words in the finance world. After missing Madoff, is Fake Ethan Hawke really equating a bunch of Wallstreetbets Redditors YOLO-ing their own money to meme a stock with Boiler Room pump and dumpers duping grandmas out of their pensions?

Stock manipulation is illegal. The SEC defines it as:

Does that apply to r/wallstreetbets? No, no, and no. Of course it’s possible that a few of the 1M+ accounts used WSB (or anywhere, really) in ways that may rise to the SEC’s definition of manipulation. I’m sure they’ll be caught if they did. However, Wallstreetbets is a forum and led no such conspiracy. They are no more responsible for bad actors exploiting their forum than are Facebook, Twitter, or Youtube.

The community has hundreds of amateur promoters vying for community attention at any given time. As long as we’ve tracked Wallstreetbets, they have probably tried to meme every stock in the market. Just last summer “Tanker Gang” tried and failed to pump tanker ships into a meme when oil crashed and floating storage came into temporary demand. It didn’t work and they lost money. No bailout, though.

The fact is, Wallstreetbets have been talking about Gamestop since at least late 2019. Michael Burry of The Big Short fame got them interested. But who is Wallstreetbets? There isn’t some inner circle of mods who get together and decide what to push. WSB is ruled by the law of the jungle- they buy puts and calls, celebrate big wins and losses, promote memes and dis them. They use crude language and generally lack empathy. So what? That’s not a crime...yet.

There were over a million people on WSB before GME made its now infamous rocketship impression. The only thing they seemed to agree on was that Elon Musk is a god and the market should be treated with the same respect as a Reno casino. Wallstreetbets certainly didn’t make some pact to collectively collude on Gamestop. It may have evolved into a consensus, but that wasn’t always the case.

Step into our WAYBACK MACHINE and decide for yourself…

In December of 2019, GME $6 calls expiring Jan 3 were purchased by [identity protected]. No serious short squeeze money was made on that trade:

Another claim being made is that WSB are buying purely for manipulation purposes and pay no attention to fundamentals. That is not the case at all. Here’s just one example from New Years Day 2020- due diligence strongly supporting equity value under both a liquidation, modest turn-around scenarios:

“Obviously common equity is last in line. As of August of 2019 GME had $424mm of cash and equivalents, $122mm of receivables, $950mm of inventory and about $140mm of prepaid expenses. Add in $1B of real estate and $2.2B of liabilities and you're left with about $810mm of equity or around $9/sh in tangible equity. Obviously, cash and equivalents can be assumed at full carrying value, as can the prepaid expenses since it's a safe assumption that the business would not be in an overnight fire sale and have some operations before liquidating. Receivables can probably be sold off quickly at 80¢ or so on the dollar. This puts discounted current assets excluding inventory at $661mm. Real estate is carried at $1B and is seen as fairly desirable. It's fair to assume it can be liquidated at somewhere above 75¢ on the dollar, or $750-$800mm. Before inventory, our discounted assets are now $1.4B against $2.2B of liabilities. Inventory now just needs to be sold off at above 80¢ on the dollar to break even on equity, which is a little high but not impossible since they're mostly used games and therefore carrying value is already steeply discounted. I believe the brand has some value left, and the operating business could be sold off or run for a few more years for some extra profits. At easily over $4-5B in sales and a 33% gross margin, any credible investment banker could fetch a valuation of the equity in the mid-hundred millions if not much higher. GME could very easily be liquidated or acquired for around where shares trade today, especially given the recent EBITDA breakeven. Cost cutting, if done by a competent manager, could result in annual EBITDA in excess of $150-200mm. This gives a pretty favorable EV/EBITDA for an acquirer when I bought -- roughly 7-10x. That shouldn't be difficult to find a buyer for.”- Jan 1, 2020 @ 22:59:49.000

Is it OK to buy stonks hedge funds are short if you also have a fundamental catalyst? Asking for some friends at Wallstreetbets:

“Just a heads up everyone it was just leaked that the new ps console will be able to play every previous generation PlayStation game. This is massively bullish for $gme right here with 105% short interest right now and almost 40% borrowing rates. Should fly this week!” -Jan 5, 2020 @ 22:34:09.000

A lot of people saw the trade and made an expensive long term bet via LEAPS, no doubt paying hedge funds and other large institutions for the privilege:

The weirdest thing about the coordinated Wallstreetbets pump is that most of the community was betting against the company early on and then throughout the Summer and Fall. Were these trades just a smokescreen, part of the WSB inner circle’s grand plan? The stock really took off after Mr Ride or Die and Mr Pottymouth bought their puts: